How much do you remember about the innovative Microsoft Outlook 97? Find out why this program was a milestone. It was the best of times or was it the worst of times? The year was 1997 and Bill Clinton was in the White House – for a second term. The Green Bay Packers had just […]
Book A Discovery Call

How much do you remember about the innovative Microsoft Outlook 97? Find out why this program was a milestone. 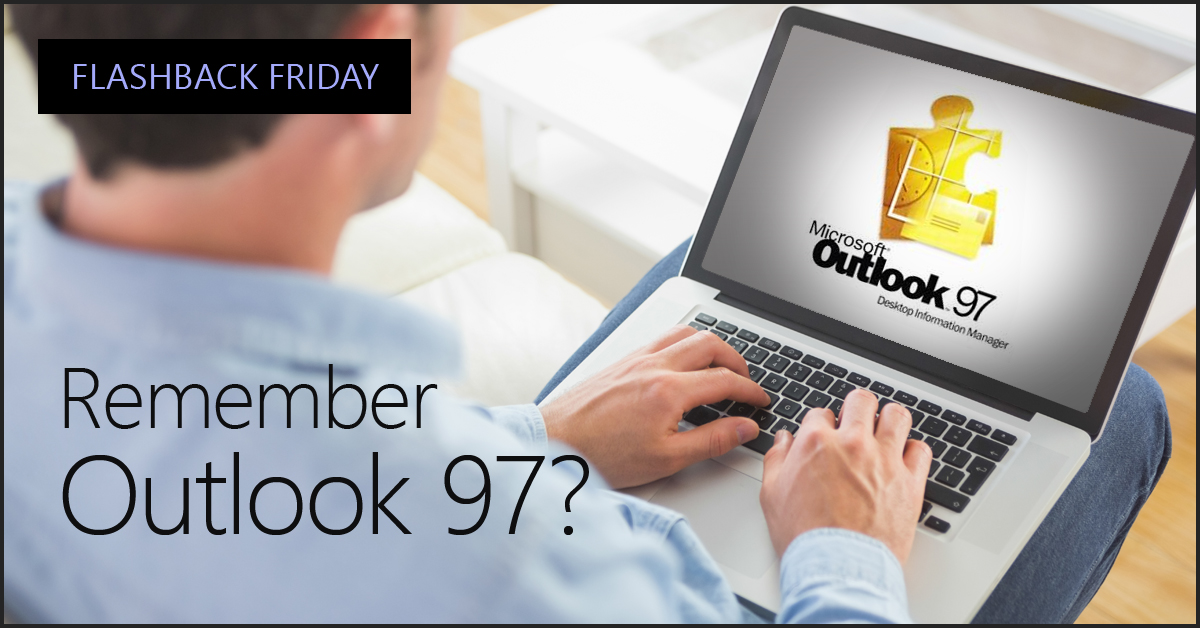 It was the best of times or was it the worst of times? The year was 1997 and Bill Clinton was in the White House – for a second term. The Green Bay Packers had just won Super Bowl XXXI and Microsoft had reached a milestone with the release of their Office 97 package, which included a new email program titled Outlook.

The 1997 version of the Office Suite brought with it literally hundreds of new features, many of which involved Outlook in some way. Office 97 was available to users on a CD-ROM – very high-tech at the time – or on over 40 3 ½ floppy disks. Today, Outlook has grown up considerably. In 2015, Microsoft released a mobile version of the program as part of Office 365 but it all started with that innovated first generation software titled Outlook 97.

Of course, there is much more to Outlook than an email client. Microsoft marketed this new addition to their popular Office software as a personal information manager, meaning it had a calendar, editable list of contacts and much more. Outlook essentially combined two older programs: Schedule+, which was Microsoft’s calendar and Exchange Client, their first email client offering. You could start Outlook from a desktop icon or access it via the Start menu under Microsoft Office.

If you are remembering back to what it was like to work with software programs in those days, try imaging those light gray boxes that were all over Windows back then – that should help. Outlook utilized those same signature dialog boxes for everything from your address book to accessing new emails.

As with most current programs, anything that you needed to accomplish was found on the menu bar. In fact, the program used many of the same icons as you see today even outside of Microsoft products. You could also access system features from the drop down menus. This was often the fastest way navigate when trying to:

Through Outlook 97, you could also access advanced features like remote mail and set up a NetMeeting conference call. What you didn’t see yet was things like video or much in the way of graphics period. Outlook 97 was very much block text with little interesting formatting options, and, of course, most people still dialed up to retrieve emails. When you synchronized in Outlook 97, you were downloading mail stored in an online email account to your computer not syncing different devices together.

How Outlook has Changed Over the Years

The 1997 version was the first generation, so, understandably, the program has changed over the years. For example, the 1998 version of Outlook was offered free as a way to popularize the software and establish Microsoft as something beyond operating systems. In the year 2000, premium Outlook was included in the Exchange Server package and soon after Office XP brought it back as part of the Suite bundle.

Microsoft took a different approach with the 2003 version of the software by making it stand alone and compatible with both Office 2003 and Exchange 2003. By the release of Outlook 2013, many of the core features remained with a few exceptions:

The things that made Outlook such a progressive program, however; remain. Outlook is still a personal management system with email, calendar, to-do list and features designed to make you time-efficient.